Set your DVR, folks, because Every Christmas Romance is making its NATIONAL TELEVISION BROADCAST debut! It may be at 6 am (Eastern time, 3 am PST) and it may be a Christmas special airing on February 12th, but I’m still excited as hell that our film is airing on Shorts TV! Besides, it *is* a film about romance, so even though we missed Christmas, it’ll be perfect timing for Valentine’s Day!

Shorts TV is viewable on channel 573 through DirectTV and 1789 through U-Verse!

NEXT SATURDAY – @katrowbeeshow & the Darling Misfits and Shadow Circus Creature Theatre are performing a set together for The Edwardian Ball 20th Anniversary!

The Edwardian Ball has been a part of my world for a little under half my life; since 2000 I’ve only missed it twice, and since 2009 I’ve worked on it every year except last year.

I’m really pleased to be a part of this 20th Anniversary with Kat, and I hope you all come out to see it! we’ll be performing at 11:30 pm on the Lodge Stage. see you all there!  #edwardianball #katrobichaud #misfitcabaret #puppets #puppetry

Listen folks, I know my page is deeply at risk of being considered a secondary ad account for Misfit Cabaret lately, but I’m really so proud of this show and this cast of lovely people who I adore and also my puppet somehow reminds me of a Disneyland animatronic which brings me joy. I am a very lucky and grateful mad puppeteer. ❤️ Photos by @zoartphotography and Emily Ephidian.

This cast is so phenomenal, and I really love doing the show so much! I’m really excited to do it again tonight, and I really hope to see you all there! #misfitcabaret #katrobichaud #halloween #circusarts #drag #puppetry #burlesque #varietyshow 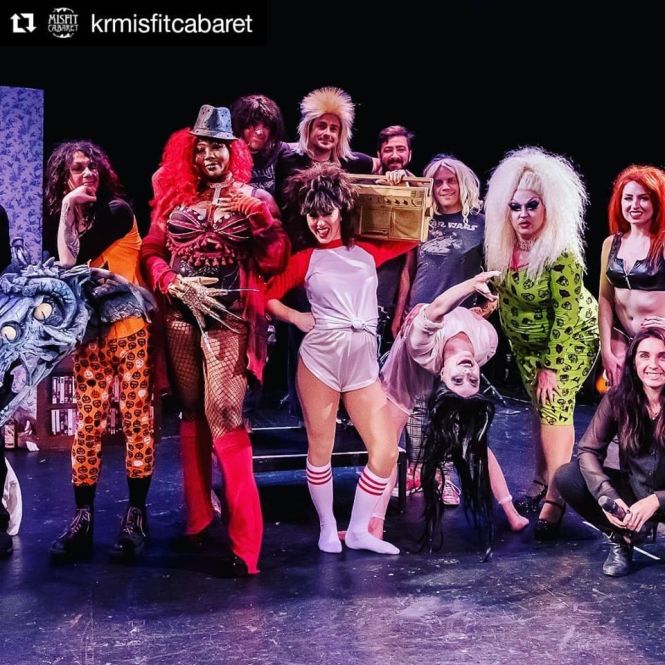 Hooooooly crap, folks! Scary Stories just got accepted into a SECOND film festival – the Nightmares Film Festival in Columbus Ohio! I am so incredibly thrilled that people are enjoying our preposterous little films, and I’m so grateful to have friends to help make these harebrained schemes happen! ❤️❤️
#sasquatch #scarystories #puppets #puppetry #nightmaresfilmfestival

Tickets and Info at http://www.nightmaresfest.com/

So I’m building a few things for Misfit Cabaret: Night Terrors, but I specifically set myself a goal that for this Halloween season, I wanted to give Kat one of the coolest, scariest, largest puppets that I’ve ever put on a stage. Here’s the unpainted head so far for the gobliny/dragon/wendigo monster that’ll be stomping around the Alcazar stage starting October 4th! I’m also gonna build A KITTY!!!! #puppets #puppetmaking #misfitcabaret #nightterrors #halloween #alcazartheatre

On opening weekend of ‘Scary Stories to Tell in the Dark’, I’m thrilled to announce that an installment of our parody series ‘Sassy’s Scary Stories to Tell by the Campfire’ is going to be showing at the NEW ORLEANS HORROR FILM FESTIVAL!!! If you’re in the NOLA area, you can see Hipster Sasquatch, Victoria Victrola and Francesca Sapien on the big screen in our production of BLOODY MARY!

Tickets and more info at https://nolahff.com/

Even though we’re only in July, we here at Team Shadow Circus never stop thinking about Halloween, and that’s why I’m pleased to announce that I’ll be doing creature puppetry for the San Francisco run of Misfit Cabaret: Night Terrors!

NIGHT TERRORS
Join the Darling Misfits for an 80’s slumber party that goes horribly wrong as the guests start dying in horrific ways. A musical Variety show with intrigue, murder, popcorn and more! Don’t miss as contortionists climb out of TVs, Freddy Kruger slips into your dreams and out of her clothes, and we unmask a murderer!

Misfit Cabaret is a splendiferous variety show centered around magical music with a rotating cast of eccentric performers. From burlesque to drag to circus to magic, you never know what you’re going to see (or what you’re getting yourself into)! For each new Misfit Cabaret, emcee Kat Robichaud writes two original songs keeping with the theme of the evening and plays them with her Darling Misfit band, as well as a special medley to kick off the evening and welcome in the spirits of San Francisco’s saucy past. There’s comedy, romance, and bawdiness around every corner and not a dull moment or dry eye in the house.

Night Terrors begins the first two weekends in October, at Misfit Cabaret’s new home at the Alcazar Theater in San Francisco! We’ll be posting more details as they come!

Heeey, Minneapolis friends! Have you always wanted to see me perform, but haven’t been able to because I live in the distant lands of California? Well, tomorrow’s your chance, because I’ll be performing as part of the The National Puppet Slam!

“Funding made possible in part by the HBH fund”

the Rarig Center, University of Minnesota

In just ONE MONTH we’ll be venturing down to LA to bring Misfit Cabaret Whimsea LA to our Southern California friends! It’ll be an amazing night of music, sideshow, drag, a menagerie of my belligerent puppets and our intrepid and talented captain Kat Robichaud steering the ship! I hope all our friends come out to see it! #puppetry #puppets #drag #sideshow #pirates #misfit cabaret #katrobichaud #Whimsea #hayworththeatre